Artem Mirolevich: The Palace of Poseidon (2021)

“The Palace of Poseidon” reveals the artist’s life-long fascination with the maritime subject matter. A signature Mirolevich whimsical tour-de-force, the works abound in outlandish details and unexpected compositions. “Ship in the City” features a tower-like vessel docked in the futuristic harbor, with an eccentric creature curiously monitoring the drop of its anchor.

In “Ship in The Sea”, a ship is gliding through tranquil waves among a multitude of maritime marauders. An underwater city where the god of the sea resides is looming at the bottom of the ocean. “Poseidon’s Head” is an imposing portrait of the ruler of the underwater kingdom.

A contemporary artist par excellence, Mirolevich navigates digital space with the same ease as the realm of brush, pencil, and paper. “The Palace of Poseidon” retains the unique expressive quality of the artist’s physical work, enhancing his signature attention to detail and superior craftsmanship.

Born in 1976 in Minsk, Belarus, Artem Mirolevich received his MFA from the School of Visual Arts in New York. Since then, the artist’s works have been subject to over 100 solo exhibitions worldwide and are included in museum and private collections in the U.S. and abroad (John Edward Walsh Jr., Robert Rothchild, Swiss Beats, Nic Iljine, Kolodzei Art Foundation). Mirolevich lives and works in New York. 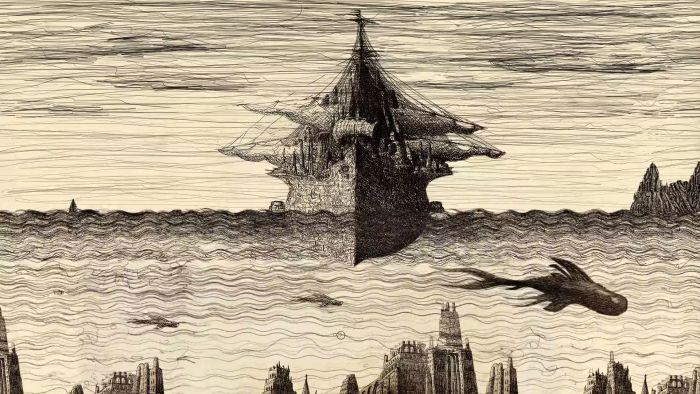