Michael Kendrix Temple (aka Madd Kyng) was born in Fort Bragg, North Carolina. Temple holds B.A. in Applied Arts and Sciences, with a concentration in Painting and Printmaking and African studies from San Diego State University. Works by Michael Temple are included in numerous private collections worldwide. Several murals by Madd Kyng are found in Bushwick, Brooklyn, and Houston. The artist lives and works in Houston, Texas.

In the course of his short career, Michael had been exploring virtually every artistic media, ranging from classical oil paintings to video art, sculpture and fashion. A new generation cutting edge professional, Michael consistently demonstrates excellence in handling any material that comes into his capable hands.

The artist defines his style as Cultural Pop Art and Afrofuturism. He draws inspiration from programmatic Pop imagery, expanding its vocabulary to include mass cultural icons of today such as Mets, Supreme, and Chanel.

The viewer is welcome to swipe the surface of the canvas, revealing another image underneath. Preserving traditional Pop art bold palette and simple yet impressive composition, Temple almost invariably adds indigenous elements to his work, in a nod to his deep interest and knowledge of African American culture.

The Legacy series (2017), Temple revisits the creative output of Hedi Xandt’s “Sebastian II for the Griswolds”, a prominent contemporary sculptor. Placing Xandt’s signature memento mori scull against Pop background, Temple creates his own, uplifting version of this macabre subject. This striking luminous work reveals the artist’s fascination and knowledge of rap music and lyrics, with quotes from Pulitzer Prize-winning rapper Kendrick Lamar in the background.

Legacy #1 is Michael’s interpretation of Xandt’s famed piece «Goddess of the Grove”, depicting a Greek goddess Athena. Full of programmatic elements of Pop Art, it incorporates a quote by Andy Warhol “The goal is not to live forever but to create something that will”. This work empowers the message of leaving something behind in the world for the history, legacy. 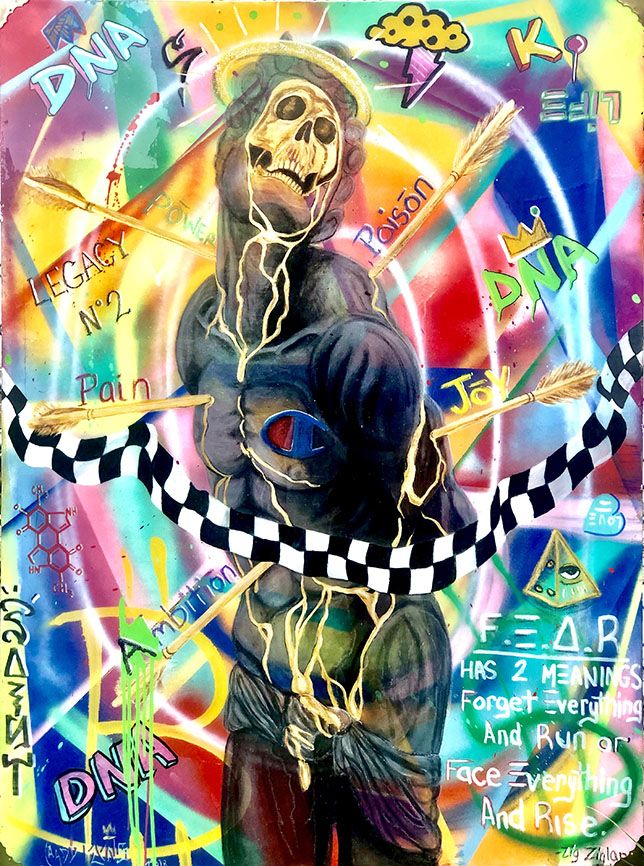